During the First World War the Australian Comforts Fund co-ordinated the distribution of small gifts to soldiers to make their life a little more pleasant.

It was formed in August 1916 and co-ordinated the efforts made by various existing State based patriotic funds. In the field, its activities were overseen by commissioners who held honorary rank as officers. Local Drummoyne Alderman, Mayor and politician, Thomas Henley was one such commissioner who visited Egypt, France and Britain in his work for the Australian Comforts Fund. His own son, Lieutenant Harold Leslie Henley was killed in action on 15 August 1916 in France.

This postcard was distributed to soldiers by the Australian Comforts Fund at Christmas 1916. It was sent by Private Henry George Jeffery to his family in Five Dock. Harry was killed in action on 4 October 1917 in Belgium.

The postcard artwork is by Laurie Tayler (Lawrence B. Tayler), an Australian artist and cartoonist of the period. The gentle humour of the postcard (‘People have been very kind to me in London’) belies the horror of the First World War experience.

Posted in Drummoyne, Five Dock, More than just a name 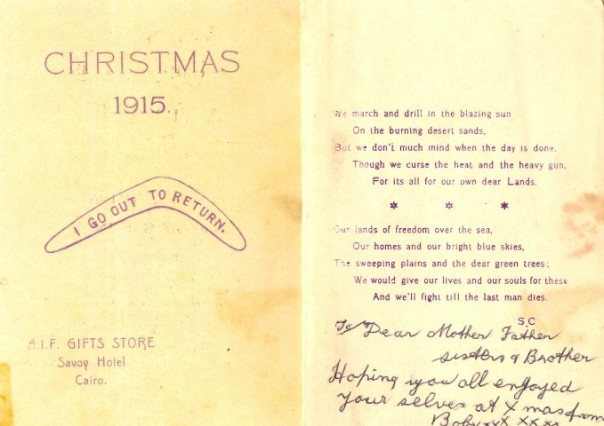 In 1915 Private Robert (Bob) Jeffery sent this simple card from Cairo to his family in Five Dock. It was printed on lightweight paper in Cairo and distributed to soldiers by the Australian Comforts Fund. At home it was lovingly preserved by his mother Margaret Jeffery in an album of postcards and letters sent by her two sons and nephew while serving in the First World War.

Bob was only 15 at the time of his enlistment. On Christmas day 1915 he wrote to his family,’I hope you all enjoyed your Xmas dinner, because I did, I had some roast turkey, boiled cabbage & roast potatoes, also some pudding and the day before yesterday most of us got our Xmas gifts from the Australian Comforts Fund. I got a billy can full of tobacco, cigarettes, cigars and matches, chocolate…writing paper, a plum pudding and a little square box with a dozen postcards… I don’t think I’ll go short of smokes for a while.’

After serving in the Middle East, Bob, like the message on the card, returned to his family in Australia. 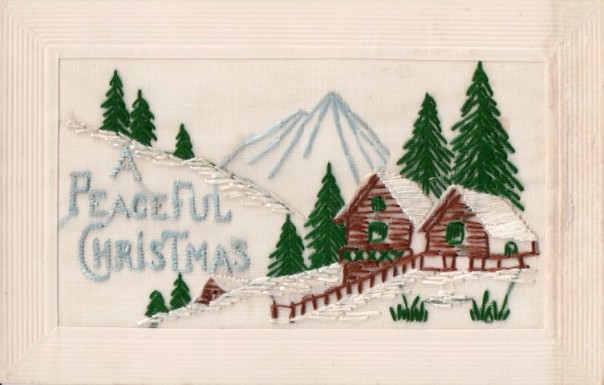 Surprisingly, from the midst of the horrors of the First World War came one of the prettiest of souvenirs. Embroidered silk postcards were first made at the time of the Paris Exhibition in 1900 and became a popular souvenir between 1914 and 1918.

The postcards were produced in France by French and Belgian women. Panels were hand-embroidered by women and girls at home then sent to factories where they were cut and mounted on to card. The cards provided income for women and were a popular souvenir for soldiers to send home. An estimated ten million embroidered postcards were made during the war.

Generally the postcards were sent through military mail pouches so many of these fragile cards have survived in good condition. Their beauty and link with loved ones ensured that they were treasured by those receiving them.

The postcard, above, was sent from France by Alfred Robert Cassidy to his Aunt Margaret Jeffery in Five Dock in 1916. The sentiments of the card still remain true today. 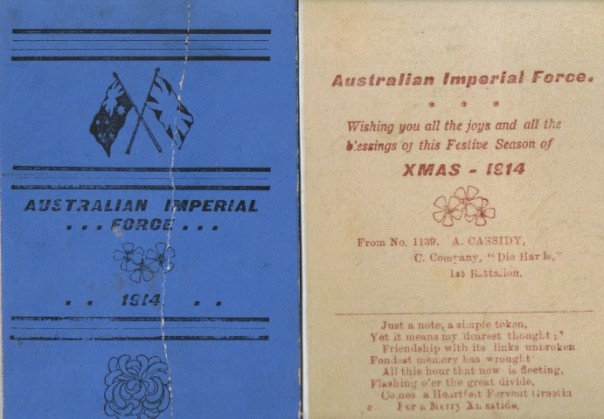 A Christmas card sent from Alf to his Auntie Maggie, ‘En route to England for the European War’ in December 1914.

A common belief at the time was that the war would be ‘over by Christmas’ but, of course, it was to grind on relentlessly until an Armistice was declared on 11 November 1918.

Alfred Robert Cassidy (‘Alf’) served with the 1st Australian Infantry Battalion and was killed in action on 9 April 1917 in France, aged 24 years.

The little Christmas card, measuring 12cm by 8cm, was lovingly preserved by his aunt Margaret Jeffery (‘Maggie’) of Five Dock and was amongst material donated to Local Studies recently.