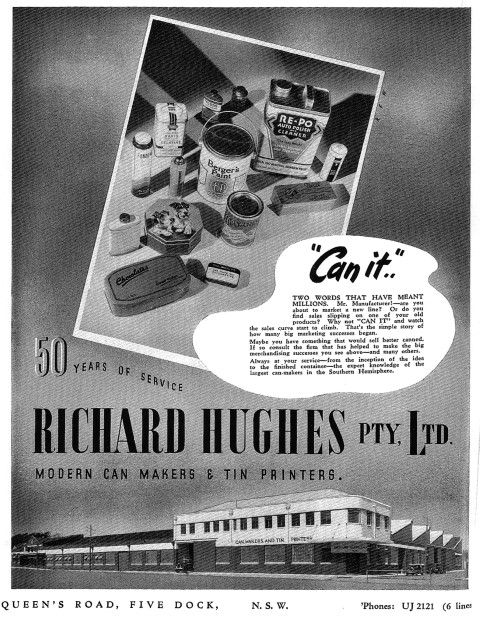 In 1951 the company Gadsden-Hughes was formed by the merger of J. Gadsen Pty Ltd and Richard Hughes Pty Ltd, two of Sydney’s largest tin and metal container makers.

J. Gadsden Pty Ltd began in Melbourne in 1889 when Jabez Gadsden started experimenting with the processes of printing on tinplate. In 1896 Gadsden imported a flatbed lithographic press from Britain and established a tinprinting and decorating works. The company produced the first printed can in Australia – a tea caddy commemorating the Diamond Jubilee of Queen Victoria. The company continued to expand and by 1936 operated twelve factories throughout Australia and New Zealand.

In Five Dock the firm of Richard Hughes Pty Ltd had similarly found a ready market for tin and metal plate containers. In a 1940 advertisement, above, the company claimed to be ‘the largest can-makers in the Southern Hemisphere’. Located at Queen Street, Five Dock the company was an important local employer, producing everything from paint cans for Berger to fancy chocolate tins.

The photograph below shows the Richard Hughes Pty Ltd factory in 1937.

Chiswick Baths and adjoining Chambers Park were developed largely through the efforts of the local community.

The Chiswick Progress Association suggested a pool and public reserve at Blackwall Point Road in 1944. At that time the population of Chiswick was ‘scarcely 220’.

It was not until 1956 however that the Chiswick Baths were finally opened. The pool was maintained through community volunteers with financial and material support from Drummoyne Council (and later the City of Canada Bay). The original wire netting used to section the pool off from the Parramatta River was purchased from the nearby Lysaght factory.

Sixty years on the tidal pool remains a popular spot with locals.

On Sunday, 20 November 2016 from 10am to 1pm there will be a range of activities to celebrate 60 years of fun and enjoyment. 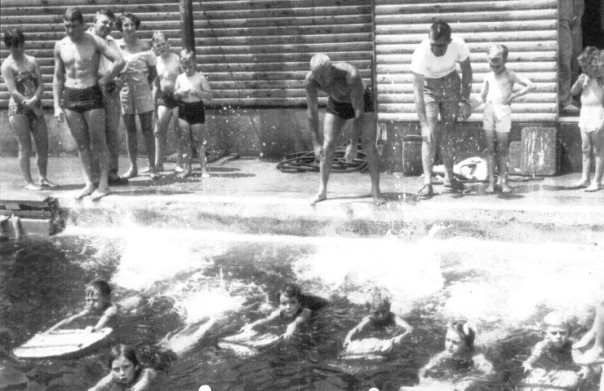 The Drummoyne Amateur Swimming Club has played an important part in the recreational life of our community for over a hundred years. It has had great success in fostering swimming not only at the local level but is associated with some of Australia’s greatest sporting achievements. Its history is studded with the names of famous swimmers and coaches.

Past and present members of the Drummoyne Amateur Swimming Club will be coming along to Five Dock Library on Tuesday, 15 November 2016 from 6pm to 8pm to share their memories and stories of the club. The stories will be recorded and added to the library’s oral history collection.

Anyone interested in the history of swimming is welcome to come along and share in the club’s rich history of sporting achievement. 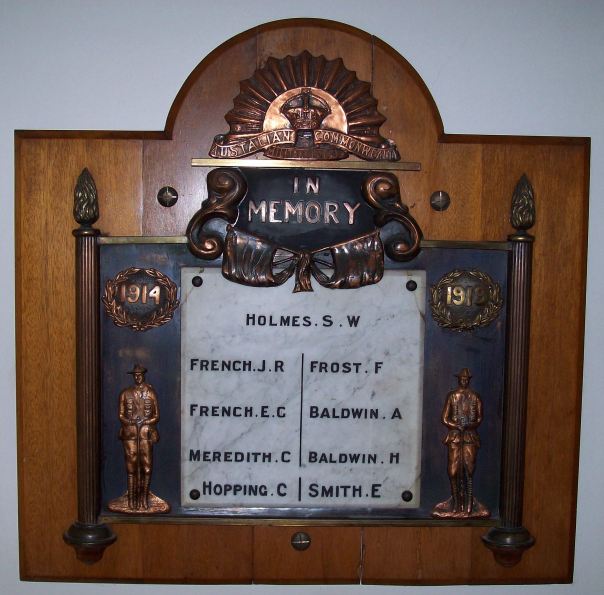 Throughout the City of Canada Bay there are many memorials, large and small, dedicated to the memory of local men and women who served our country in war.

The beautiful memorial, above, pays tribute to nine soldiers from the Five Dock Methodist Church (now Five Dock Uniting Church) who did not return from the First World War. Undoubtedly it was crafted with love and compassion.

Images of some of the war memorials in the City of Canada Bay can be seen on flickr.

One hundred years of shelter 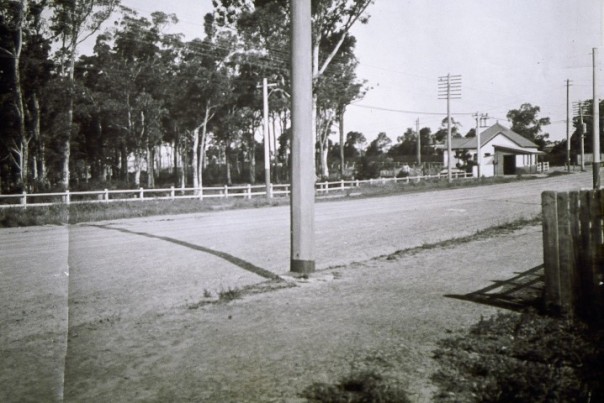 While the Great North Road at Abbotsford has changed markedly since this photograph was taken in 1918, the tram shelter (seen on the right) has remained a constant fixture for over a hundred years.

According to the Sydney Tramway Museum these shelters were called ‘Waiting Rooms’ or ‘Waiting Sheds’. The one at Abbotsford was erected on 21 July 1911.

The Abbotsford line opened as a steam tramway and was the last of the western suburbs tramways to be electrified. The fully electrified tramway opened on Sunday, 16 April 1905. The first electric tram to Abbotsford was N class car 647 which completed a trial trip a few days before the opening. Services were provided by the Rozelle Tram Depot and an improved service, running every twenty minutes, replaced the steam service.

Now serving as a bus shelter, it has recently been fully restored, ensuring it will continue to provide shelter for many years to come.