1917 saw widespread industrial unrest, beginning in Sydney and spreading across NSW, culminating in a General Strike.

The initial trigger for the strike was the introduction of a new labour costing system by the New South Wales Department of Railways and Tramways which led to workers walking off the job at Randwick Workshops and Eveleigh Carriage Works in August 1917. Discontent spread to other industries as wages had not kept pace with increasing prices during the First World War.

On the 3 September 1917, some 600 AGL (Australian Gas Light Company) workers at Mortlake went on strike. To keep vital gas services operating, positions at the gas works were filled by volunteers, referred to as ‘Loyalists’ by some and less pleasant names by others. The photograph, above, shows the tents of volunteers at AGL, from ‘Everyday scenes at Mortlake Gas Works’ published in the Sydney Mail.

The Gas Workers returned to work on 17 September 1917.

Local services marking Anzac Day this year include special recognition of the Battle of Bullecourt at the Breakfast Point War Memorial.

Of the many First World War battles those at Bullecourt in northern France were amongst the most horrific. Four experienced Australian divisions of I ANZAC Corps were part of the British 5th Army under Sir Hubert Gough. The general wanted to attack at Bullecourt to support an important offensive by the adjoining British 3rd Army to the north and the French Army further to the south. However poor planning resulted in heavy losses. The first attack launched at Bullecourt on 11 April 1917 was a disaster. Despite this a further attack across the same ground was ordered for 3 May. The Australians broke into and took part of the Hindenburg Line but no important strategic advantage was ever gained. In the two battles the AIF lost 10,000 men.

The Breakfast Point War Memorial lists the names of eight local men who died at Bullecourt.

The photograph shows the unveiling of the Australian Gas Light Company (AGL) war memorial by Sir Dudley de Chair, Governor of NSW in 1926. It has since been replaced by the Breakfast Point memorial.

Local Studies recently received a wonderful donation of photographs of the AGL (Australian Gas Light Company) works at Mortlake from GML Heritage. It includes a series of AGL images taken prior to the redevelopment of the site as well as some interesting early images of the gasworks.

AGL purchased 32 hectares of land at Mortlake in 1884 and commenced gas production two years later. The gasworks dominated the Mortlake landscape for over a hundred years until its closure in 1990 when the site was redeveloped for medium-density housing and today is known as Breakfast Point.

The photograph, above, is from about 1900 and shows AGL’s first Retort House (on the left) which was at the heart of the gas manufacturing operations. At this time the gas was made using coal which was transported to Mortlake from Newcastle by colliers, known as ‘sixty milers’ (the distance between the two locations). On the right can be seen the Blacksmith’s shop which has survived and been restored to become the Breakfast Point Sales Office.

The collection donated by GML Heritage will be digitised and added to ‘Canada Bay Connections’.

An exciting new art installation planned for Cabarita Park will bring together stories and images of what the park means to local people.

Artists Sean Bacon and Kym Vercoe are collecting stories and images which will be projected on to fig and palm trees in the park. They are having a filming day in Cabarita Park on Saturday, 5 November 2016 from 11am to 2pm so come along and share what the park means to you.

The aerial photograph, taken in 1968, shows Cabarita Park in the centre of the image. In the foreground can be seen the AGL (Australian Gas Light Company) works at Mortlake, now redeveloped as Breakfast Point. 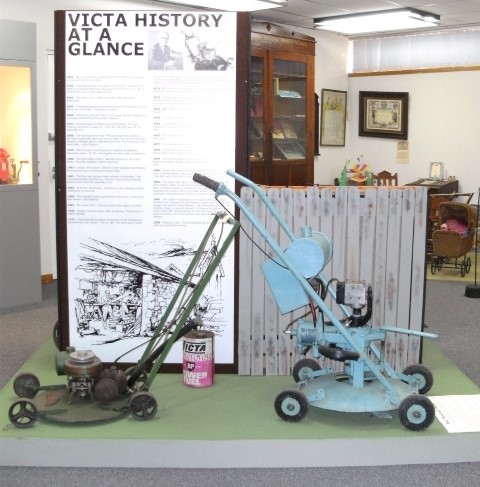 From speedos and zinc cream to spray on skin and cochlear hearing implants, Australian innovations have had a worldwide impact. A highlight of the museum’s collection is a display devoted to the development of the Victa mower.

In 1952 Mervyn Victor Richardson of Concord put his mind to inventing a machine to cut the grass in his suburban garden. Using scrap material to hand he developed a prototype which attracted considerable attention. He began by producing mowers in his garage but before long expanded his operations to an old shed at the rear of St Mary’s Church, Mortlake. Demand continued to grow so that by 1958 his company, Victa Mowers Pty Ltd moved to a factory at Milperra. Since then over eight million lawnmowers have been produced.

The display at the City of Canada Bay Museum continues until the end of June.

A dip into the past

In the late nineteenth and early twentieth centuries there were many tidal swimming pools along the Parramatta River providing welcome relief and recreation on hot days.

In November 1888 bricklayer Samuel Ashton purchased Lots 7 and 8, Section 3 of the Mortlake Estate. Samuel Ashton had emigrated from England with his family, probably in late 1884 or early 1885. He was soon engaged in building a baths, blasted out of sandstone bedrock adjacent to the foreshore. They measured 30 metres by 12 metres. In September 1889 Samuel Ashton advertised to purchase a “Centrifugal PUMP, 3 or 4 in., with 30ft. piping.” (The Sydney Morning Herald, Thursday 12 September 1889, p14.) He devised a way to empty and fill the baths with the tides and every fortnight they were emptied out and the sides and bottom scrubbed and whitewashed.

It was previously thought the baths were constructed in 1886, but as Ashton didn’t purchase the land until late in 1888, 1889-1890 is more likely. Certainly they were complete by September 1890 when they were advertised as the “Mortlake Baths”. They are believed to be the first non-tidal enclosed public baths built in metropolitan Sydney. In the early days males and females were strictly segregated. Under no circumstances were men and women allowed to swim together. Bathers were charged threepence admission, which included use of a clean towel.

It is recorded that 21,000 school children attended the baths each week during the swimming season. Although electric pumps had been installed so the baths were not dependant on the tides, competition from larger and more modern swimming pools in the area led to a decline in patronage in the 1930s. Ashton’s Mortlake Baths closed to the public in 1934 (The Sun, Thursday 27 September 1934) and Samuel Ashton died on 22 May 1936. The site was used as Ashton Brothers paint factory and the pool was filled in about 1950. The land remained in the ownership of the Ashton family until 1961.

More than just a name

The six-week project involved 90 students, researching 27 soldiers who worked at the Australian Gas Light Company, Mortlake. The students used iMovie on the City of Canada Bay Libraries’ portable multimedia studio to create a two-minute video commemorating the lives of the soldiers.

‘It is important that our future generations remember the sacrifice these soldiers took for our country and educating our youth is one way to ensure their memory lives on,’ Mayor Angelo Tsirekas said.

Students from Concord Public School and Concord High School are also participating in the project.

The ‘More than just a name’ student videos can be seen on youtube.

City of Canada Bay Library Service provides access to two important databases for people wishing to trace their family history, Ancestry and Find My Past.

To coincide with Family History Month, Heather Garnsey of the Society of Australian Genealogists will be giving an informative talk to help family history researchers. The talk is aimed at current users of Ancestry and Find My Past who would like to enhance their search skills and use these databases to greater effect.

The talk will be held at Concord Library on Tuesday, 27 August 2013.

The photograph shows John and Amanda Jane Smith with their children at Mortlake. Behind their home looms one of the AGL (Australian Gas Light Company) Gas Storage Tanks. John Smith was an engineer, born in Kent, who came to Australia to install a new stoking machine at AGL. After serving 15 years with AGL he operated the Petersham Hotel for a period before returning to AGL where he worked until his death in 1927.

The Mortlake – Putney Vehicular Ferry, commonly known as the Mortlake Punt*, is one of the few remaining car-carrying ferries operating in New South Wales and the only one in the metropolitan area. Over the years most punts have been replaced by bridges.

When it opened in May 1928, the Mortlake Punt provided an important link for workers travelling to the AGL (Australian Gas Light Company) works at Mortlake. The background scene of the 1988 photograph, above, has changed dramatically as the AGL site has been redeveloped for housing.

Another punt operated at Rhodes beween Blaxland Road, Rhodes and Meadowbank from the nineteenth century until 1935.

The view from above 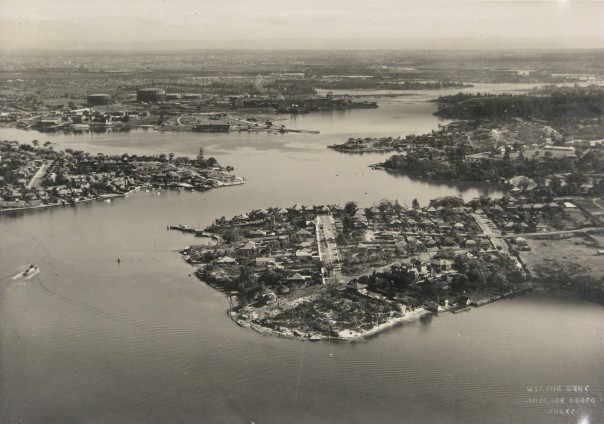 Canada Bay Connections includes many aerial photographs which provide a fascinating perspective of our area.

The photograph above shows the Parramatta River looking towards Cabarita and Mortlake. The huge gas storage tanks of the Australian Gas Light Company (AGL) can be seen dominating the landscape.

AGL purchased 32 hectares of land at Mortlake in 1884 and commenced gas production two years later. Following the closure of the gasworks in 1990 the site has been redeveloped for medium-density housing and today is known as Breakfast Point.

The photograph is by Milton Kent (1888-1965) who specialised in oblique aerial photography over Sydney in the 1930s. The image is believed to have been taken in 1939.