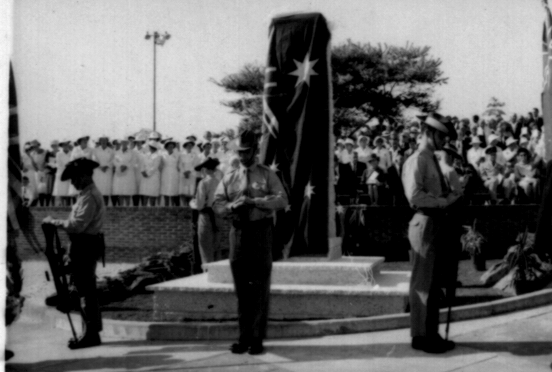 This year marks the 75th anniversary of the siege of Tobruk during the Second World War.

Five Dock has played a special part in the commemoration and remembrance of Tobruk. The photograph shows the unveiling of the Tobruk obelisk at the corner of Lyons Road and Great North Road by Sir Roden Cutler in 1968. It is modelled on the memorial at the Tobruk War Cemetery. Adjacent to the memorial is a row of trees planted by the Ladies of the Rats of Tobruk Association and the mast of the HMAS Vendetta which played a vital role in supply and reinforcement at Tobruk.

Each year veterans met at the memorial on ‘Tobruk Sunday’, the Sunday in April closest to the date when the siege began on 10 April 1941. Last year was the last occasion that the Tobruk veterans marched at Five Dock.

The 100 years of Anzac page includes some fascinating memories of Tobruk veterans.