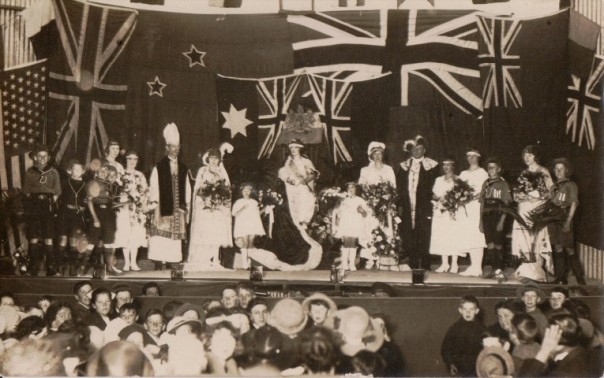 During the First World War, those at ‘home’ did what they could to show support for the soldiers on active duty.

There were a variety of fundraising activities, such as the Grand Patriotic Carnival at Five Dock. Money raised would often be used to provide ‘comforts’ (little gifts) for the soldiers. Women and girls would knit socks for the soldiers, often including notes of support and encouragement to the soldiers. Bob Jeffery of Five Dock received a parcel at Christmas 1916 which included a pudding, jam and chocolates. Bob wrote back to nine year old Ethel Elliot who had sent the parcel and they continued writing to each other for the rest of their lives, although they never met until 1972.

The photograph, above, is a rare image of a concert held at the Five Dock School of Arts to raise funds for the Red Cross. Ena Jeffery (sister of Bob) recalled that as a young girl she sang, ‘Won’t you buy my pretty flowers’ at the concert. ‘I threw flowers from my basket to the audience and they in turn threw money on to the stage to help the Red Cross.’